“You’re from Canada? Do you live in an igloo? And see penguins?”

“Yeah. I ride my pet polar bear to school every day.” I replied to my new camp friend.

“No… Do you seriously think we live in igloos? Those are Eskimos in Alaska, Americans, by the way. Plus penguins don’t live in the Arctic. They only live in Antarctica.” I learned that from a 2-Minute Mysteries novel and felt very smart as I said it.

However, the conversation repeated itself enough times throughout my life to create a list of other examples:

13 Things all Canadians have been asked: 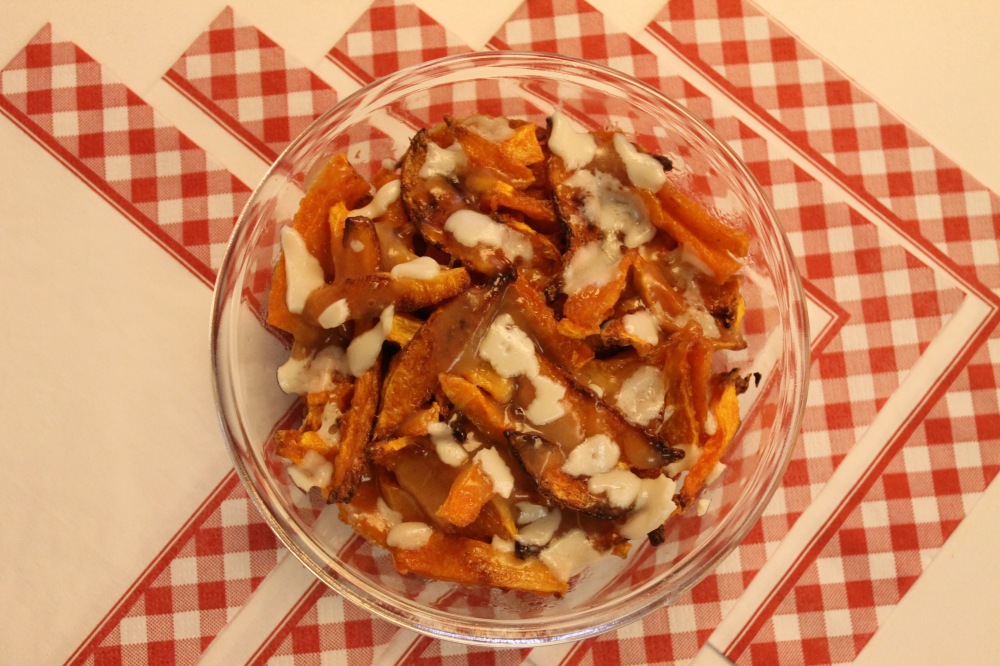 I admit most of these statements were inspired by debates with my American friends. You know you who are, and I’m sorry I’m so harsh. It’s not really nice of me, eh? How a-boot we make up? Come into my igloo, and I’ll give you some poutine.

Poutine is layers of French fries, hot gravy, melted cheese, and comforting indulgence. It’s the most famous Canadian food, next to our beer and maple syrup. The first bite of poutine is savoury bliss. The last bite turns into nausea and stomach cramps. As much as we Canadians love our poutine, it’s a hard-core fast food, filled with dairy, gluten, and enough oil to destroy any gut.

It’s a-boot time, we changed that, eh? Here’s a new and improved recipe, using nutrient-packed squash baked into fries, a quick and tasty gravy, and a dairy-free cheese option.

Oh Canada, we love poutine. So put on your hockey jersey, sit under your favourite maple tree, wash it down with a Tim Horton’s Double-Double, go ice fishing, chat with a moose, and share the scrumptiousness with pet polar bear and penguin.